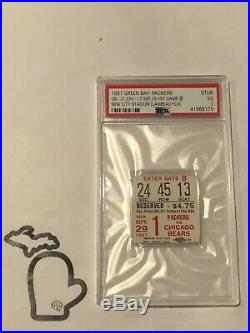 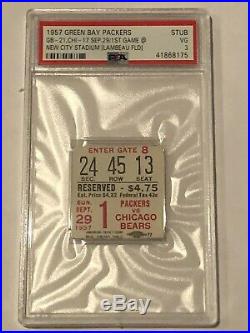 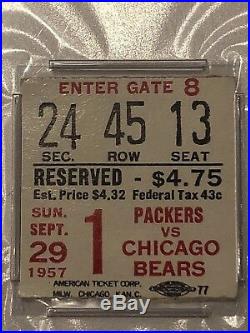 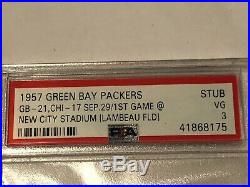 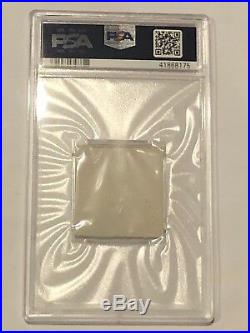 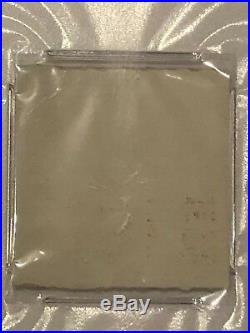 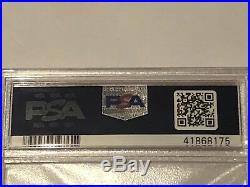 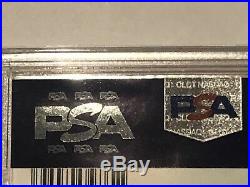 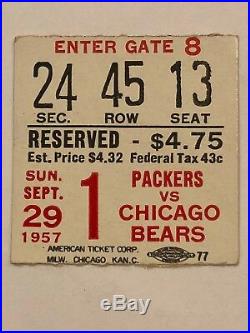 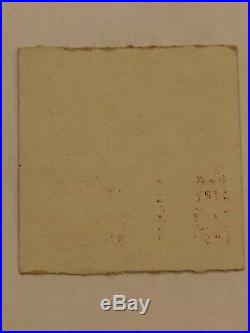 This is a sale for a 100% authentic & original ticket stub in VERY GOOD condition for the Chicago Bears at the Green Bay Packers for the 1957 game. NOTE UPDATE – I just got the ticket back from PSA, they corrected the printed label to the correct date. Pix have been updated. Ticket (of course) came back legit as as I expected a solid Very Good (PSA 3) and for beginning ticket collectors a VG3 for a vintage ticket is actually a very nice ticket. This ticket is so INCREDIBLY SIGNIFICANT!! This game marked the first game ever played in new City Stadium which would later be named Lambeau Field!!! This was the dedication game for the new stadium and who better than your arch rival, the Chicago Bears! PRICE: This is an incredibly scarce ticket and given it’s place in sports history, you must snag this while it’s available. The less than ideals are: please see pix. And a PSA 3 speaks for itself. Dedication/Stadium/Game Highlights include: Since 1925, the Packers had played at 25,000-seat City Stadium, located behind Green Bay East High School. However, by the 1950s, it was considered inadequate for the times. It was built almost entirely of wood, and East High’s locker room facilities were considered inadequate even in the 1920s; visiting teams often dressed at their hotel. Besides the school’s location which limited any expansion of the seating southward, its placement along the East River meant seating expansion on the north and east sides of the stadium was also impossible. Officials in Milwaukee, 120 miles (190 km) to the south, where the Packers had played part of their schedule since 1933, knew that City Stadium was less than ideal as an NFL venue. They built Milwaukee County Stadium in 1953 in hopes of luring the Packers there full-time. As originally built, County Stadium was double the size of City Stadium. Soon after County Stadium opened, the other NFL owners threatened to force the Packers to move to Milwaukee unless they built a new stadium. In August 1955, the Packers announced plans for a new stadium in Green Bay, with a seating capacity of 32,000. In April 1956, Green Bay voters responded by approving (70.3%) a bond issue to finance the new stadium. The new stadium was the first modern stadium built specifically for an NFL franchise. At the time, the eleven other NFL teams were playing either in facilities shared with major league baseball teams, or in other pre-existing shared facilities. The site, now bordered on three sides by the village of Ashwaubenon, was selected because it had a natural slope, ideal for creating the bowl shape, along with expansive parking. The nearby outdoor practice fields (Clarke Hinkle Field and Ray Nitschke Field) and Don Hutson Center are in Ashwaubenon, as was the Packers Hall of Fame until 2003. The new City Stadium was officially opened in week one of the 1957 season on September 29, as the Packers upset the rival Bears 2117 in front of a capacity crowd of 32,132. In a ceremony at halftime, the stadium was dedicated by Vice President Richard Nixon. Also in attendance on the platform were reigning Miss America Marilyn Van Derbur, NFL commissioner Bert Bell, and Bears’ owner George Halas, on a brief leave from coaching. Although they now had a modern facility in Green Bay, the Packers continued to play two or three regular-season games in Milwaukee at County Stadium. Starting in 1995, expansions to Lambeau Field (see below) made it financially realistic for the Packers to play their entire regular season in Green Bay for the first time in over 60 years. Former Milwaukee ticket holders receive tickets to a preseason game and games 2 and 5 of the regular season home schedule, in what is referred to as the “Gold package”. Green Bay season ticket holders receive tickets to the remaining home games as part of their “Green package”. This is a MUST HAVE piece for the biggest of Packers & Bears fans or NFL purists. The item “1957 Chicago Bears Green Bay Packers Lambeau Dedication Football Ticket Stub VG” is in sale since Tuesday, June 12, 2018. This item is in the category “Sports Mem, Cards & Fan Shop\Vintage Sports Memorabilia\Ticket Stubs”. The seller is “mitten_state_of_mind” and is located in Canton, Michigan. This item can be shipped to United States, United Kingdom, Denmark, Romania, Slovakia, Bulgaria, Czech republic, Finland, Hungary, Latvia, Lithuania, Malta, Estonia, Australia, Greece, Portugal, Cyprus, Slovenia, Japan, China, Sweden, South Korea, Indonesia, South africa, Thailand, Belgium, France, Hong Kong, Ireland, Netherlands, Poland, Spain, Italy, Germany, Austria, Bahamas, Israel, Mexico, New Zealand, Singapore, Switzerland, Norway, Saudi arabia, Ukraine, United arab emirates, Qatar, Bahrain, Croatia, Malaysia, Brazil, Chile, Colombia, Panama, Jamaica, Barbados, Bangladesh, Bermuda, Brunei darussalam, Bolivia, Ecuador, Egypt, French guiana, Guernsey, Gibraltar, Guadeloupe, Iceland, Jersey, Jordan, Cambodia, Cayman islands, Liechtenstein, Sri lanka, Luxembourg, Monaco, Macao, Martinique, Maldives, Nicaragua, Oman, Peru, Pakistan, Paraguay, Reunion, Viet nam, Uruguay.